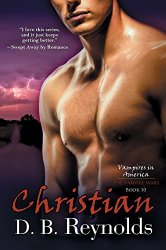 “[D. B. Reynolds] has outdone herself this time. I haven’t experienced such a sense of urgency, such a rush of adrenaline in a long while.” —Nocturnal Book Reviews“. . . vivid images capture the imagination, and the reader can practically feel the energy and emotions that vibrate from the characters.” —Literary Addicts“I love this series, and it just keeps getting better . . .” —Swept Away by Romance They want him dead and her enslaved . . .Texas . . . the heart of a territory that stretches from the golden deserts of New Mexico to the turquoise shores of the Florida Keys. It’s big, it’s rich, and it’s the next battleground for some of the most dangerous vampires in the world.Christian Duvall . . . charismatic and powerful, and determined to claim the South as his own. But with old enemies and new fighting to stop him, victory suddenly takes on a brutal, and far more treacherous, edge. Because what one of his enemies wants more than anything else already belongs to Christian . . . and her name is Natalie.Natalie Vivant Gaudet . . . brilliant and lovely, a strong Southern woman who can unravel the most intricate financial schemes designed to swindle and steal. She loves her complex job and the simplicity of her life. And then she meets Christian. He’s beautiful, he’s complicated, and she’ll fight to keep him alive.With allies trying to kill him, and enemies readying a horde of zombie vampires to roll over all of Texas, it will take every shred of Christian’s power and Natalie’s determination to win this war and give North America a brand new Lord of the South. D. B. Reynolds is the RT and EPIC Award-Winning author of the Vampires in America series of paranormal romance, and an Emmy-nominated television sound editor. She lives with her husband of many years in a flammable canyon near Los Angeles, and when she’s not writing her own books, she can usually be found reading someone else’s. Visit her blog at www.dbreynolds.com for details on all of her books, for free stories and more.

Do you want ot get the Christian: Vampires in America – The Vampire Wars, Book 10?