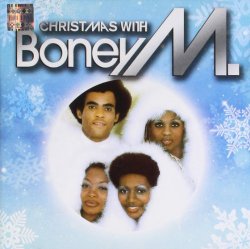 2007 reissue of Boney M.'s holiday album featuring bonus tracks. Long sought after by Christmas music fans, the quartet's disco-fied version of 'Mary's Boy Child' is one of the most requested Christmas tunes in the world (and this release features two versions)! This Euro-Disco quartet were put together by producer/songwriter Frank Farian and their albums and singles were aimed directly at the dancefloors across the world. Boney M.'s sound featured male/female harmony vocals, a stomping Disco beat, swooping strings, funky guitar and hook-filled melodies that are still fondly remembered by millions of fans worldwide. 19 tracks.

Do you want ot get the Christmas With Boney M?