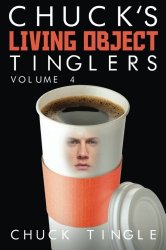 Chuck Tingle is a world-renowned master of the ‘tingler’; a story so sensual, so erotic, and so powerfully gay that it will change the whole way you look at erotic romance literature. Collected here are three such tales of the living object variety. Are you ready to depart on a depraved journey of gay lust that will tingle you to your very core? If so, than this explicit collection is for you. REAMED BY MY REACTION TO THE TITLE OF THIS BOOK Buck Trungle has released a brand new tale of hardcore gay erotica, but could the story itself be too powerful to contain within the realm of mere words? When Josh receives a link to the story marked “not safe for work” he somehow manages to keep his curiosity at bay while still in the office. His friend, however, is not so lucky. Soon enough, Josh finds the very fabric of time and space ripping apart in a homosexual mystery that will change the fate of his entire universe, and ours. Warning: Once you learn the secrets held within, there is no turning back. ANGRY MAN POUNDED BY THE FEAR OF HIS LATENT GAYNESS OVER A DINOSAUR TRANSITIONING INTO A UNICORN When Carl’s bro sends him photos of a hot and sexy unicorn, he cant help getting turned on. But when Carl discovers that the unicorn of his dreams was once reality star and athlete, Bort Jenkins, a former tyrannosaurus rex from the show Borting Up With The Dinosaurs, Carl’s whole world turns upside down. Terrified that he may be dinosexual, conservative Carl is now thrown into a whirlwind of self-destruction, culminating in a literal encounter with his sexual identity fears. Soon enough, Carl finds himself in a hot gay gangbang with his physically manifested bigotry. But will this extreme pounding be enough to help this Carl learn that real love takes many forms? SLAMMED UP THE BUTT BY MY HOT COFFEE BOSS When Yonce arrives at the office he has no idea that, by the end of the workday, his life will have changed forever thanks to the new boss, a piping-hot cup of coffee named Morcho Kibclaw. Immediately, Morcho takes the office by storm, firing many of the workers and spilling his hot liquid body onto the others. But when Morcho and Yonce have their first meeting alone, sparks immediately fly, resulting in a gay anal slamming that is definitely not safe for work!