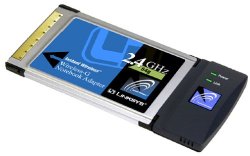 Wireless-G is the upcoming 54Mbps wireless networking standard that's almost five times faster than the widely deployed Wireless-B (802.11b) products found in homes, businesses, and public wireless hotspots around the country - but since they share the same 2.4GHz radio band, Wireless-G devices can also work with existing 11Mbps Wireless-B equipment. The new Wireless-G Notebook Adapter from Linksys has both standards built in, so you can connect your notebook to existing 802.11b infrastructure, and also the new screaming fast Wireless-G networks. The included Setup Wizard will walk you through configuring the adapter to your network's settings, step by step. Then just slide it into your notebook's PC Card slot and enjoy network access with your notebook computer, while retaining true mobility. Once you're connected, you can keep in touch with your e-mail, access the Internet, and share files and other resources such as printers and network storage with other computers on the network, wherever you wander. At home, you can surf the web or use instant messaging to chat with friends while sitting out on the patio.You'll also be able to connect with any of the growing number of public wireless hotspots springing up in coffee shops, airport lounges, hotels and convention centers. And as those hotspots upgrade to the new high-speed Wireless-G standard, you'll be ready to take advantage of the increased speeds. Get connected to current-standard 802.11b networks today, and be prepared for the future with the Wireless-G Notebook Adapter from Linksys.