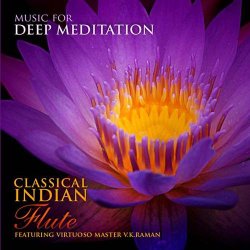 This recording captures the unspoiled purity of the classical Indian flute accompanied by the tamboura.The simple but powerful compositions bring the mind to an exquisite place of stillness, refreshing your whole being and turning the attention within.The flute is masterfully played by venerable V.K. Raman, one of the greatest musicians of classical Indian flute alive today. He not only is an accomplished musician but a yogi who poured his whole heart into the project.The Indian classical flute developed independently from its Western counterparts. Made with bamboo, Indian flutes are keyless. There are two main varieties used--both played in this recording. The first is the Bansuri, used predominantly in Hindustani music. The second is the Venu, which is mostly used in Carnatic style, the music of the South of India.Each track has a different raga improvisation which has the power to soothe the mind and has the power to bring the body to a state of complete calm and relaxation.This product is manufactured on demand using CD-R recordable media. Amazon.com's standard return policy will apply.