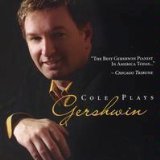 The world has celebrated the centennial of George Gershwin’s birth, and, despite the incessant pommeling his music undergoes with regularity, he and his works will be around for a second hundred. Among the reasons: performances such as these by Kevin Cole-Gershwinesque, vibrant, twinkling with humor and richly romantic. Years ago, Kevin, barely twenty, attended a party in the Greenwich Village apartment of Emily Paley, a lifelong friend of Gershwin. He would entertain a special group of friends by playing a piano that Gershwin had selected for her. Kevin proceeded to improvise a medley of Gershwin songs, as Gershwin himself had often done on the same instrument. Midway through, Emily’s brother, English Strunsky, who had heard Gershwin play whispered, "Where did he learn to play like George?" He didn’t; he simply does. Other Gershwinites agreeing: Mabel Schirmer, Frances Godowsky (Gershwin’s younger sister, Frankie), as well as lyricist E.Y. Harburg ("Over the Rainbow"), who exclaimed, "I haven’t heard anyone play like that since George! Other Kevin admirers include songwriters Harold Arlen, Irving Berlin, and Hugh Martin, a virtual Who’s Who of American popular song. Kevin, without realizing it, had recreated the kind of party that Gershwin had energized at the Paleys in the Village of the 1920’s, or at his penthouses in the Twenties and Thirties. Welcome to the Party! -Ed Jablonski Gershwin Biographer