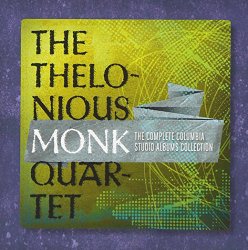 The Thelonious Monk Quartet: The Complete Columbia Studio Albums brings together the most popular of Monk's recordings of the period, including Monk's Dream (1962), Criss Cross (1962), It's Monk's Time (1964), Monk (1964), Straight, No Chaser (1966) and Underground (1967); albums that found the influential and iconoclastic pianist and composer collaborating with one of the most sympathetic interpreters of his lyrical and thorny music, the tenor saxophonist Charlie Rouse. While Monk had been acknowledged by fellow musicians as one of the linchpins of modern jazz, it wasn't until he signed with Columbia Records that he achieved considerable popular recognition. His albums sold widely, his quartet became a considerable live attraction and, amazingly enough, he found himself on the cover of Time Magazine in early 1964. This comprehensive six CD set also boasts a beautifully designed booklet filled with previously unseen photos capturing Monk and his musicians at the historic recording sessions.

Do you want ot get the Complete Albums Collection?