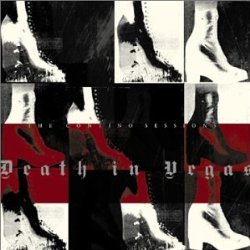 Richard Fearless has earned his name. Death in Vegas's 1997 debut, Dead Elvis, established him as a defiant DJ, mixing techno with weird dub, rock, and industrial. Despite itself, the disc spawned a hit ("Dirt"), an experience he may have wished to replicate here, though Contino pushes even harder in multiple directions. Many high-profile guests add to the blend of smooth grooves, noisy ambience, and raucous rock rhythms. Primal Scream's Bobby Gillespie conjures a laid-back hip-hop posture for "Soul Auctioneer," while Jim Reid makes "Broken Little Sister" sound a lot like his own band, Jesus and Mary Chain. On "Aisha," Iggy Pop's wicked monologue could rival Nick Cave's creep-factor were it not for Fearless's musical playfulness. From gospel choirs and organs to Americana twang, deep bass rumblings to spacey sci-fi sounds, The Contino Sessions is a psychedelic trip with bravery and grit. --Liisa Ladouceur

Do you want ot get the Contino Sessions?