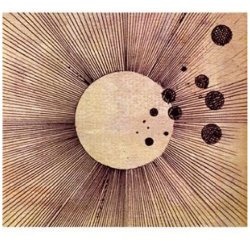 When global bass music matriarch Mary Anne Hobbs recently told The Fader ''Flying Lotus, for me,is like the Hendrix of his generation'', it seemed more than an audacious opinion, and with the arrival of Cosmogramma, it's revealed as a revelation. In the past couple of years since his debut album, Los Angeles, Flying Lotus has grown into the position of being far more than a producer, he has helped materialize a far-reaching strain of musical ideology that has encompassed not only a global family of like-minded artists, but also a nearly infinite palate of planetary (and interplanetary) sonics. No longer simply an outgrowth of Ellisona's machines, the music here is also the product of live instrumentalists from the worlds that Cosmogramma engages. There's the constant bass presence of ''Thundercat'', a cornerstone of Sa-Ra Creative; there's Rebekah Raff's harp connecting the dots between the music of Harry Partch and Ghostface Killah (both of which she's performed); there's an appearance by the tenor sax of Steven's cousin and jazz royalty, Ravi Coltrane, and by the voice of one Thom Yorke, an Oxford bloke taking respite from singing in the most influential rock band of the 21st century.

Do you want ot get the Cosmogramma?