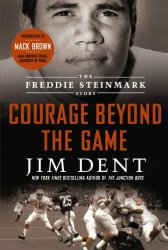 Jim Dent, the award-winning, New York Times bestselling author of The Junction Boys, returns with a powerful Texas story which transcends college football, displaying the courage and determination of one of the game's most valiant players.Freddie Steinmark was a small but scrappy young man when he arrived at the University of Texas in 1967. A tenacious competitor, Freddie became UT's star safety by the start of the 1969 season, but he'd also developed a crippling pain in his thigh. Freddie continued to play, helping the Longhorns to rip through opponents like pulpwood. His final game was for the 1969 national championship, when the Longhorns rallied to beat Arkansas in a legendary game that has become known as "the Game of the Century." Tragically, bone cancer took Freddie off the field when nothing else could. But nothing could extinguish his irrepressible spirit or keep him away from the game. Today, a photo of Freddie hangs in the tunnel at Darrell K. Royal-Texas Memorial Stadium, where players touch it before games en route to the field. With this moving story, a Brian's Song for college football, Jim Dent once again brings readers to cheers and tears with a truly American tale of bravery in the face of the worst odds. Praise for Courage Beyond the GameNamed one of Kirkus Reviews' Best Nonfiction titles of 2011"Jim Dent, dadgum him, keeps writing books I wish I'd written. Now here he comes with another terrific effort, Courage Beyond the Game, the story of the most courageous kid to ever pull on a football suit. If you pick it up, it's guaranteed to pick you up." ―Dan Jenkins"Jim Dent is a world class story teller... [he] will bring tears to your eyes, and Steinmark's example will make you want to be a better person." ―Joe Drape, New York Times bestselling author of Our Boys "A superb work that paints the resilient athlete as a fierce competitor and an unforgettable sportsman." –Kirkus, starred review

Do you want ot get the Courage Beyond the Game: The Freddie Steinmark Story?