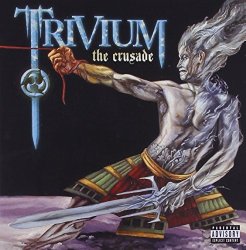 There's no such thing as a band born to greatness. To succeed in the world of music there's a whole storm of hard work to plough through. Florida's Trivium has surely earned the major contender status that has been afforded them by the international media. After spending the last few years up to their necks in blood, sweat and tears, the formidable foursome, whose 2005 sophomore release (and Roadrunner debut) Ascendancy made them a hit with discerning music fans everywhere, have paid their dues. Relentless touring around the world with over 350 shows in the past two years has sharpened the band's live prowess, making their new album, The Crusade, one of the most hotly anticipated hard rock albums of 2006. The level of charisma and energy that they've harnessed since hitting the global gig circuit has built Matt Heafy, Corey Beaulieu, Paolo Gregoletto and Travis Smith a huge international fan base that is as devoted as it is ever growing. The Crusade, the follow up to Ascendancy, their Roadrunner Records debut album (and Kerrang's Album of The Year 2005), The Crusade captures a band on a mission, reflecting their rise from virtual unknown to playing the main stage at one of the biggest rock festivals in the world (Download, UK) in a mere two years. Trivium who have played a staggering 350 shows in that time. The Crusade is an album full of tight, intricate and instantly memorable songs that feature awe-inspiring musicianship from all four members of the band.

Do you want ot get the Crusade?