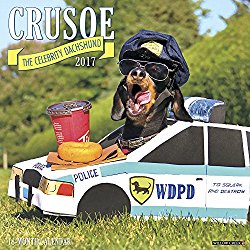 New York Times Bestselling Canine, Crusoe the Celebrity Dachshund, is proud to present his new 2017 calendar! Crusoe is a miniature dachshund who has won the hearts of over a million fans on Facebook and many more with his viral videos, funny antics, and worldly travels. If you haven't already heard of him, you might recognize him upon learning he was the star of such viral videos as dachshunds playing cops & robbers, the minions dachshunds, the hunting dachshund, and the biggest of all with 50+ million views, the two dachshunds playing hockey. He's appeared on Good Morning America, Fox & Friends, GoPro, Mashable, Buzzfeed, TIME, and more! The large format, 18-month wall calendar features some of Crusoe's latest and greatest photos - and even has QR codes that will take you directly to some of his most popular videos online. The calendar grids have ample room for jotting notes and reminders. Also included are six bonus months of July through December 2016 as well as moon phases, U.S. and international holidays.