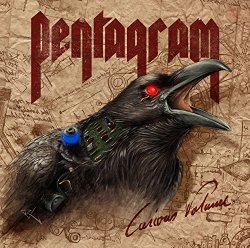 The new studio album from US legends Pentagram reuniting the band once more with Peaceville Records for some supreme classic heavy metal. The highly influential American heavy metal/doom act, fronted by the mysterious Bobby Liebling, formed in the early 1970s, though their debut album "Relentless" didn t see a release until 1985. "Curious Volume" was recorded with Swedish producer Mattias Nilsson at studios in Baltimore, DC and VA, with additional vocal and guitar production in Knoxville, TN with Travis Wyrick. Wyrick is a Grammy Award winning producer who produced their previous album, Last Rites . Features compositions from the core of Victor Griffin, Greg Turley and Bobby Liebling to produce an album that encompasses the true spirit of Pentagram with its catchy hooks throughout 11 metal anthems. Through 4 decades of adversity and triumph, Pentagram has become a legendary international act and has firmly stamped their name in the heavy metal history books, with tours planned throughout North America and Europe during 2015.