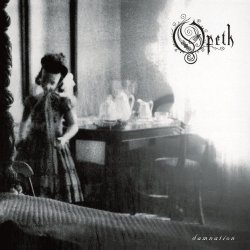 Released in 2003, Damnation is easily the most radical departure of Opeth's career. The companion piece to the previous year's Deliverance set, to which it was originally inextricably married (before record company marketing men got their dirty little hands on them), the album is the first to explore the group's non-heavy metal-based songwriting both at length and exclusively. Since all of Opeth's previous outings were specifically conceived for the express purpose of contrasting heavy and light, violent and delicate, black and white, such a uniform presentation would already be surprising enough, but perhaps even more astounding is the realization that Damnation can't even be termed a heavy metal album. This is because, except for very brief moments in the excellent "Closure," not a distorted power guitar chord, not a pounding bass drum, not a growled death vocal is to be found here -- only mellow, melancholy, deeply reflective numbers boasting melodic electric and acoustic guitars, the odd bit of piano and Mellotron (performed by the producer, Porcupine Tree's Steve Wilson), and background string arrangements. Rather, alluringly mournful tracks like "Windowpane," "Death Whispered a Lullaby," "Hope Leaves," and "Ending Credits" are at once complex and supple. Relatively of short length by Opeth standards, they often resemble the short musical interludes separating the band's prevalent explosions of black metal fury and progressive rock excursions. Laid out in unnaturally fluid sequence here, these songs obviously fail to provide the striking, surprise-filled experience that longtime