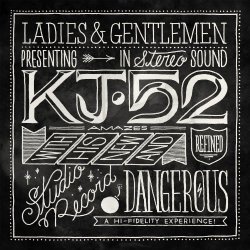 Leaving behind all inhibition, KJ-52 is charging back into the scene with his anticipated new release, "Dangerous." Picking up where his Dove Award-winning "Five-Two Television" (2010 Rap/Hip Hop Album of the Year) left off, Jonah Sorrentino is back and bold as ever with his passionate call to be "Dangerous." Having overcome many obstacles in his career with over 550,000 albums sold, the rapper cries out for people to be real, to share the love of Christ with others without restraint. Teaming up with producers Ted T (Mute Math, Stacie Orrico) and Aaron Sprinkle (Jeremy Camp, Anberlin, Kutless), KJ-52 has outdone himself once again. He is known in the industry as an excellent performer, producer, and songwriter, and this release reaffirms all of the above. "Five-Two Television" proved that he was willing to take his critics head on, and "Dangerous" proves that he means it.