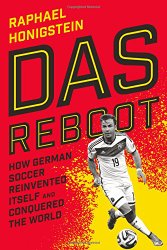 A beautiful story, expertly told.” Per Mertesacker, Arsenal defender and member of the German national team, winners of the 2014 World CupEstádio do Maracanã, July 13, 2014, the last ten minutes of extra time in the World Cup Final: German forward Mario Götze jumps to meet a floated pass from André Schürrle, cushions the ball with his chest, and in one fluid motion volleys the ball past the onrushing Argentine goalkeeper into the far corner of the net. The goal wins Germany the World Cup for the first time in almost thirty years. As the crowd roars, Götze looks dazed, unable to comprehend what he has done.In Das Reboot, Raphael Honigstein charts the return of German soccer from the dreary functionality of the late 1990s to Götze’s moment of sublime, balletic genius and asks: How did this come about? The answer takes him from California to Stuttgart, from Munich to the Maracanã, via Dortmund and Amsterdam. Packed with exclusive interviews with key figures, including Jürgen Klinsmann, Thomas Müller, Oliver Bierhoff, and many more, Honigstein’s book reveals the secrets of German soccer’s success.

Do you want ot get the Das Reboot: How German Soccer Reinvented Itself and Conquered the World?