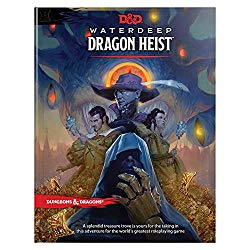 Experience the ultimate urban treasure hunt in this adventure for the world’s greatest roleplaying game.   “A perfect starter campaign.”—Andrew Whalen, Newsweek   “D&D acolytes are everywhere...Tech workers from Silicon Valley to Brooklyn have long-running campaigns, and the showrunners and the novelist behind ‘Game of Thrones’ have all been Dungeon Masters.”—Neima Jahromi, The New Yorker   “Want to be part of something big?”—A parchment tied to a flying snake, page 38 of Dragon Heist   Welcome to Waterdeep. You’re summoned by Volothamp Geddarm, famous explorer and raconteur, to complete a simple quest. Is anything ever really simple though?   • Waterdeep, known as the City of Splendors, is one of D&D’s most iconic locations. Also the setting for the board game Lords of Waterdeeep, it’s the jewel of the Sword Coast—a sprawling melting pot held together by firm laws and swift justice.   • Take players through levels one to five in this Dungeons & Dragons adventure. Five story arcs guide players through each level for a multi-session campaign experience inspired by classic heist films.   • In D&D, you and your friends coauthor you own legend. Guided by a Dungeon Master, you create characters and play their roles in a story, rolling dice and navigating maps as you unfold a tale as limitless as your imagination.   • Dungeons & Dragons is the world’s greatest roleplaying game. Created in 1974, D&D transformed gaming culture by blending traditional fantasy with miniatures and wargaming.   “[Waterdeep: Dragon Heist] is state of the art tabletop design. . .one of the best introductions to D&D that I’ve ever come across.”—Charlie Hall, Polygon.com   “Waterdeep: Dragon Heist is a shining example of what Dungeons & Dragons can be and should be: fun and unpredictable.”—Gavin Sheehan, BleedingCool.com

Safari: A Memoir of a Worldwide Travel Pioneer
Treat Your Own Back 9th Ed (802-9)
Real Law Stories: Inside the American Judicial Process
The Story of Life in 25 Fossils: Tales of Intrepid Fossil Hunters and the Wonders of Evolution
We Go to the Gallery (Dung Beetle Reading Scheme 1a)
True Taste: The Seven Essential Wine Words