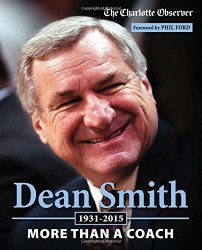 A moving tribute to the late Dean Smith, who was a basketball coaching legend at North Carolina as well as a socially conscious person who did what he thought was right, no matter the consequences. When he retired in 1997, he was the winningest coach in NCAA Division I men's basketball history. Beloved by fans and players alike, Coach Smith's legacy was apparent well before his passing in February 2015. In Dean Smith: More Than A Coach, the Charlotte Observer's commemorative, 128-page tribute features rare stories and photographs from the newspaper's archives, with a powerful foreword by Phil Ford, one of North Carolina's all-time great players under Smith, as well as the writing of acclaimed Observer columnist Scott Fowler. Whether celebrating Smith's two national championships or his leadership in integrating the North Carolina basketball program and the town of Chapel Hill, the book is an extraordinary tribute to a beloved man.