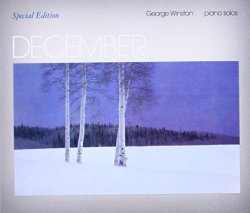 This 'Special Edition' version of 'December' features re-mastering of the original material and the inclusion of two bonus tracks: 'A Christmas Song' and 'Sleep Baby Mine.'Since he emerged on the music scene in the late '70s, George Winston has received countless accolades for his eloquent solo piano offerings. Of those, 'December' is the crown jewel. Originally released in 1982, the album features a collection of carols performed in Winston's distinctive style. The songs, which notably include 'Carol of the Bells' and 'The Holly and the Ivy,' are presented in slow, reserved arrangements that draw out the melodies and focus on the inherent serenity of the songs. Also included on the album are arrangements of classical songs (Bach, Pachelbel), as well as a handful of original songs with a wintry theme. The album is a classic for a reason - few capture the soft, pensive nature of the season quite like Winston's magnum opus.

Do you want ot get the December: Piano Solo Special Edition?