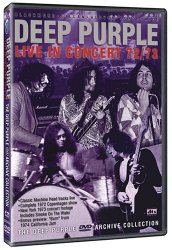 Deep Purple in 1972 were reaching the height of their success, with hit singles and albums worldwide. Into this heady atmosphere they delivered one of the most famous rock albums of all time, 'Machine Head'. 1972 saw them premier the new album at concerts in Europe, Japan and America (with no fewer than six tours there that year), delivering the powerful new 'Machine Head' set. It was a concert in the Danish capital of Copenhagen that the first (and only) full film of the famous Mk 2 line-up presented here was made, and is now available on DVD for the first time. Recorded March 1, 1972, it was originally filmed by Danmark Radio, Denmark's national radio and television station. The actual black and white footage was never screened in full and ended up lying dormant in the company's vaults. The tour continued through to 1973 when Deep Purple returned to America, selling out more shows and shifting more albums than they had ever done. A camera crew turned up to film the group in New York in May for the 'In Concert' show, and this is also released here for the first time in glorious color (on any format), including the only performance of the line-up doing 'Smoke on The Water’. LINEUP: Ritchie Blackmore: Guitar Ian Gillan: Vocals Roger Glover: Bass Jon Lord: Keyboards Ian Paice: Drums *David Coverdale: Vocals on Bonus Track Tracklisting: Copenhagen, March 1972 (black and white) (90 minutes) 1. Highway Star 2. Strange Kind Of Woman 3. Child In Time 4. The Mule 5. Lazy 6. Space Truckin' 7. Fireball 8. Lucille 9. Black Night New York, May 1973 (color) (27 minutes) 1. Strange Kind Of Woman 2. Smoke On The Water 3. Space Truckin' Bonus Features: Archive Collection Preview 1. Burn (bonus live track from Live At California Jam, 1974) DVD Credits / Links DVD History