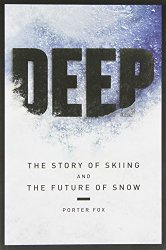 DEEP is a book about skiers, written and produced by lifelong skiers, with a message that reaches far beyond the slopes we draw inspiration from. It covers a sport that has inspired millions and the mountains and snowfall that make it possible. It is not a tale of the end. It is a beginning - a reminder of how dynamic and fulfilling the skiing life is. And a wake-up call regarding what needs to be done to save it. The narrative follows the unlikely rise of skiing from prehistoric Norwegian hunters to nobility in the Alps in the 1800s to present-day freeriders on the vaunted slopes of the Rocky Mountains. On his global tour of the most celebrated peaks in the Northern Hemisphere, from Washington's Cascade Range to Mont Blanc and the Matterhorn, Fox talks to alpinists about the allure and mysticism of the sport and to scientists about climate change and its effect on snow-ultimately finding a story that is far larger than the impending demise of skiing. For the seven million skiers in America who dedicate their winters to tracking storms and waking up at dawn to catch the first chairlift, the lifestyle change will be radical. It will likely be far worse for the rest of the world. Fox uses primary evidence and interviews, mixed with groundbreaking scientific studies, to explain exactly how and when the Great Melt will play out, the vital importance snow and ice have to Earth's climate system and the tremendous groundswell that is rising up to fight climate change. DEEP goes on to map a way to mitigate global warming, reduce human impact on our planet and repair the water cycle. As it turns out, the efforts to save snow and ice might end up saving the world.

Do you want ot get the DEEP The Story of Skiing and The Future of Snow?

Crossing In Time: The 1st Disaster (Between Two Evils) (Volume 1)
The Noonday Demon: An Atlas of Depression
The Outermost House: A Year of Life On The Great Beach of Cape Cod
Art of the Western World: From Ancient Greece to Post Modernism
Will Eisner: Champion of the Graphic Novel
Data Structures and Abstractions with Java (4th Edition)