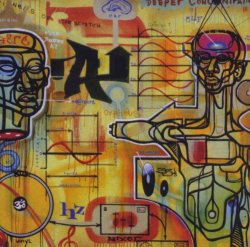 Nowhere is the divide between the mainstream and the underground greater than in hip-hop. While most hip-hop fans nod their heads to Puff Daddy and Master P., still others take solace in the idea that artists like those who appear on Deeper Concentration exist to push the music further into the future. The artists featured on this compilation are the (presently) unknown saviors of the genre: turntablist warriors like the Beat Junkies, Mix Master Mike, and Rob Swift of the X-Ecutioners; the subversive art-hop of New York City's illbient DJ Spooky (here with Organized Konfusion); and the more straightforward hip-hop of Mass Influence. It's a shame that many mainstream fans don't know about the cut-up collages of beats and pieces found on Swift's "The Age of Television" or the understated, sublime rapping of Siah and Yeshua DapoED on the aptly titled "The Cure for Stagnation." And unlike in mainstream rap and hip-hop, here the chasm between electronic and hip-hop closes: jungle and dub inch their way next to slow breakbeats while weird, off-kilter rhythms supply a purely instrumental soundtrack and--surprise!--they don't feel a bit out of place next to the rapping and scratching. --Tricia Romano

Do you want ot get the Deeper Concentration – Vol. 2?

Finding Neverland
Three Snakes And One Charm [2 LP]
Billy Joel-The Hits
In The Heart of the Moon
A Feast of Songs: Holiday Music from the Middle Ages
Close to the Edge (180 Gram Audiophile Vinyl)