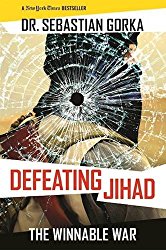 Since September 11, 2001, America has been at war. And that’s about all anyone can say with certainty about a conflict that has cost 7,000 American lives and almost $2 trillion. As long as the most basic strategic questions—Who is the enemy? Why are we fighting?—remain unanswered, victory is impossible.  Yet this war is eminently winnable if we remove our ideological blinders, accurately name our enemy, and draw up a strategy to defeat him. So says Dr. Sebastian Gorka, one of the most experienced and sought-after authorities on counterterrorism. Our enemy is not “terror” or “violent extremism.” Our enemy is the global jihadi movement, a modern totalitarian ideology rooted in the doctrines and martial history of Islam. Taking his cue from the formerly top-secret analyses that shaped the U.S. response to the communist threat, Dr. Gorka has produced a compelling profile of the jihadi movement—its mind and motivation—and a plan to defeat it.

Oh, The Things You Can Do That Are Good for You: All About Staying Healthy (Cat in the Hat’...
Southern Soups & Stews: More Than 75 Recipes from Burgoo and Gumbo to Etouffée and Fricassee
The First Year: Type 2 Diabetes: An Essential Guide for the Newly Diagnosed (The Complete First Y...
Make Me Whole (Callaway) (Volume 1)
Essential Words for the IELTS with MP3 CD, 2nd Edition (Barron’s Essential Words for the Ie...
The Anger Workbook for Women: How to Keep Your Anger from Undermining Your Self-Esteem, Your Emot...