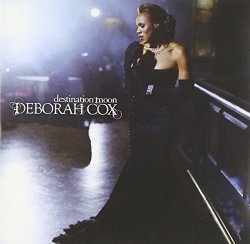 Platinum-selling recording artist Deborah Cox reinterprets the classic songs of Dinah Washington on her Decca debut, Destination Moon. The album thrusts the R&B/dance diva into whole new territory, showcasing her range and scope as an artist capable of tackling jazz, blues and big-band with ease and confidence. For the arrangements and the production, Deborah turned to the highly-versatile New York-based music man Rob Mounsey, whose credits with such diverse performers include Paul Simon, Steely Dan, Aretha Franklin and Tony Bennett to name a few. The record was made live in the studio, with 40 musicians in the same room with her, playing and singing in real time under Mounsey's direction. I'm doing this to broaden people's awareness of what I can do and also for the sheer love of her music. As a result, Deborah's homage to Dinah Washington does not lean overwhelmingly toward one particular style. It was designed from the beginning to be a compendium of several of Dinah's idioms the big-band swing of All Of Me and Destination Moon, swaggering R&B, ( I Don't Hurt Anymore) the blues that earned her the misleading nickname Queen of the Blues, (Misery, New Blowtop Blues ) the lush ballads that put her on the jukeboxes of Middle America (What A Difference A Day Made, This Bitter Earth).

Do you want ot get the Destination Moon?