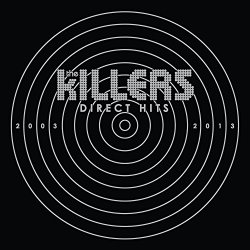 The Killers have sold over 20 million albums worldwide, headlined festivals across the globe, performed at The White House and have won multiple awards. In celebration of their four studio albums and their first decade together, The Killers will release Direct Hits. A collection of singles from their four albums, plus two brand new songs, the album begins with the band's breakthrough smash, and first single they wrote together Mr. Brightside. It follows the group through their debut album Hot Fuss and songs like Somebody Told Me, Smile Like You Mean It, All These Things That I've Done, through Sam's Town's When You Were Young, Read My Mind and For Reasons Unknown via Day & Age's singles, including the massive 2008 hit Human, and last year's stunning Battle Born album singles, starting with Runaways. To complete the set, new tracks Shot At The Dark (recorded with M83's Anthony Gonzales) and Just Another Girl produced by long time Killers collaborator Stuart Price.