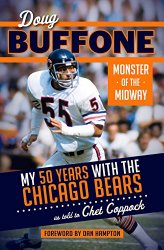 Few athletes become as synonymous with their town as Doug Buffone was with Chicago. Though he came from the hard hills of Pennsylvania, he came to embody everything Chicagoans love.  Doug was taken too young, passing away suddenly on April 20, 2015, shortly after finishing this book with famed sportscaster Chet Coppock. Doug’s was a life well-lived—he was tough enough for Papa Bear George Halas and never afraid to speak his mind. Doug Buffone lived life his way and pulled no punches.  He grew up in Yatesboro, Pennsylvania, and found his way to the Chicago Bears by way of the Louisville Cardinals. And even though he played with Hall of Famers like Dick Butkus and Gale Sayers, Doug never experienced championships as he battled through the brutal NFL of the 1970s. But in many ways it was after his career that Doug achieved greatness, because that’s when the radio introduced us to the fiery, hilarious “Uncle Doug” that we all came to love.  He felt each Bears win and loss with to-the-bone passion. He lived his life fully and in his book you will find unbelievable stories of celebrities and superstars, of fights and camaraderie and crazy nights, of a man who lived his life his way.

Do you want ot get the Doug Buffone: Monster of the Midway: My 50 Years with the Chicago Bears?

Maui Revealed: The Ultimate Guidebook
The Big White Book of Weddings: A How-to Guide for the Savvy, Stylish Bride
Calculus
Harmonograph: A Visual Guide to the Mathematics of Music (Wooden Books)
Of Courtiers and Kings: More Stories of Supreme Court Law Clerks and Their Justices (Constitution...
The Fifth Agreement: A Practical Guide to Self-Mastery (Toltec Wisdom)