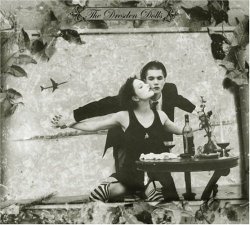 Ever since taking up arms in mid-2000, the ber-dynamic duo of Amanda Palmer (Piano/Vox) and Brian Viglione (Drums) has been selling out clubs in Boston, New York and beyond. Palmer accompanies her confessional story-songs with a thunderous and shimmering piano style that rests on the shoulders of Jerry Lee Lewis, Kurt Weill and Nina Simone. Viglione's jazz and hardcore-influenced drums are the perfect foil, providing in turns a delicate cradle of rhythm and a piercing bed of nails onto which Palmer lays her raw, tragicomic lyrics. With the their new debut album, produced by Martin Bisi (SWANS, Sonic Youth), receiving accolades from both mainstream and underground media, the Dolls are poised to transcend cult status and smash all commonly held ideas on what a rock band is supposed to be. Their awe-striking live energy and singular look has earned them opening slots for Beck, the B-52s and Jane's Addiction and a tour with Edward Ka-Spel of the Legendary Pink Dots. Fontana. 2005.