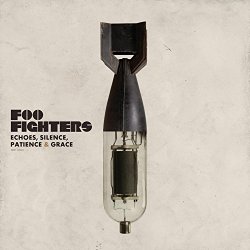 Having commemorated their tenth anniversary with a year-plus run commencing with in Your Honor (a double album the New York Times called an "unexpected magnum opus"), sold out rock arena shows and a toned down intimate theater trek, and a headlining gig at London's Hyde Park for a crowd of 85,000, the question looms larger than any in the Foo Fighters' career to date: What do they do for an encore?!? the answer comes in the form of "The Pretender," the first single from the band's sixth studio album Echoes, Silence, Patience & Grace, out on Roswell/RCA. Produced by Gil Norton, who last worked with the band on 1997's double-platinum the Colour and the Shape (recently reissued in deluxe 10th anniversary form), Dave Grohl, bassist Nate Mendel, drummer Taylor Hawkins and guitarist Chris Shiflett have crafted a 12-track milestone that showcases and reconciles the band's every strength and sensibility in the most complex and confident Foo Fighters album to date.