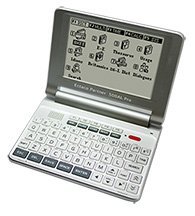 ECTACO Partner 500AL Pro is a unique translating device which allows choosing the language you want. The list of dictionaries already included in the 500AL Pro by default: Arabic, Chinese, Croatian, Czech, Danish, Dutch, English (US), English (British), Finnish, French, German, Greek, Italian, Japanese, Korean, Norwegian, Polish, Portuguese (Brazilian), Portuguese (Iberian), Russian, Spanish (Iberian), Spanish (Latin American), Swedish, Thai, Turkish, Vietnamese Designed to let anyone understand and communicate instantly, the 500AL Pro features all the latest programming advances. The 500AL Pro employs sophisticated TTS (Text-To-Speech) voice synthesis and human voice to speak any of its entries aloud so you don't have to. Perfect for anyone just beginning to explore the world of international communication, the 500AL Pro is loaded with the linguistic resources and extras that make all the difference when you need a reliable, portable companion to help make sense of the world in another language. A Complete Resource An additional 14,000 first-use phrases that can also be spoken aloud make it simple to understand and be understood in almost any commonly encountered situation. Oxford Advanced Learner's Dictionary helps to build a winning vocabulary quickly and accurately. Add in popular American idioms, a full English grammar resource with irregular verbs, and enjoyable linguistic games to improve your skills while you play and you have one of the best all-around translators ever designed. Unlimited Voice Output Employing the latest TTS speech synthesis to deliver complete pronunciation of all the entries in the 500AL Pro database means that you will always know just how a word should be said. No more trying to sound out a transcription. Just touch a button and let the 500AL Pro do the talking for you. And with unlimited voice output, the device will say anything at all - just enter any word using the comfortable and intuitive keypad and get instant clear