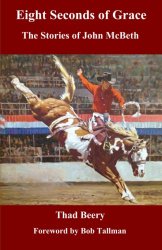 Over the course of his rodeo career John McBeth has been a world champion saddle bronc rider, a horseman, a teacher, a mentor, a businessman, a diplomat, a saddle maker, a pilot, a TV commentator, a rodeo judge and administrator. Above all he is a gifted story teller. John entered the sport in the era of the Old-Timers, a hard drinking and harder fighting tight-knit conglomeration of men from rural and ranch backgrounds who rarely thought of themselves as athletes—they were cowboys! It was a time when you had to be accepted by the group—you had to be hooked up—to make a living. In rodeo, then as now, you were only paid what you were good enough to win. No guarantees. There wasn’t much money in the sport and competition for those dollars was fierce. It was a fight for survival. Into this environment John entered with the audacious goal of not just surviving, but earning a living for a wife and family and supporting a home all on his rodeo winnings. Success required a special kind of individual, one for whom the word “can’t” held no meaning, an iron-willed individualist with supreme self-confidence and not an ounce of quit. Through the effort of will of John McBeth and many more like him the sport of rodeo was altered in a generation. Sponsors arrived bearing contracts. TV took notice. Fans arrived in droves and the money began to flow. The cowboys themselves changed. The urban cowboy became more than a myth. Rodeo became the prime-time sport of today. Though John fit the times and typifies the businessman cowboy—a teetotaler more adept in the boardroom than a barroom—he still retains that old-time cowboy grit in his bones. In Eight Seconds Of Grace he recounts his career from its beginning, breaking colts with his father on the home place in Kansas to the saddle bronc world championship and cowboy hall of fame. Through John’s own tales the reader is treated to the sights and sounds that held sway in the champion’s mind over all the years to be laid down upon these pages: stories of great broncs and great men; stories of strife and character; stories of the road and the humor and commaderie that sustained them. Through interviews with multiple world champions, hall of fame cowboys, announcers, stock contractors, students and his fellow competitors, a picture is painted of the Kansas cowboy who seemingly could do no wrong. These are stories of John McBeth and about John McBeth. Stories that define not only who he is and was, but through him describe an entire generation of the truly All-American sport—Rodeo.