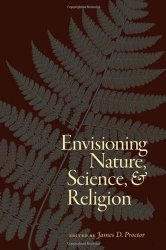 Contemporary scholarship has given rise to several different modes of understanding biophysical and human nature, each of which is entangled with related notions of science and religion. Envisioning Nature, Science, and Religion represents the culmination of three years of collaboration by an international group of fourteen natural scientists, social scientists, humanists, and theologians. The result is an intellectually stimulating volume that explores how the ideas of nature pertain to science and religion.Editor James D. Proctor has gathered sixteen in-depth essays, each of which examines and compares different aspects of five central metaphors or "visions" of biophysical and human nature. These visions are evolutionary nature, emergent nature, malleable nature, nature as sacred, and nature as culture. The book's diverse contributors offer a wide variety of unique perspectives on these five visions, spanning the intellectual spectrum and proposing important and often startling implications for religion and science alike. Throughout the essays, the authors do a great deal of cross-referencing and engaging each other's ideas, creating a cohesive dialogue on the visions of nature.Envisioning Nature, Science, and Religion offers a blend of scholarly rigor and readable prose that will be appreciated by anyone engaged in the fields of religion, philosophy, and the natural sciences.

Do you want ot get the Envisioning Nature, Science, and Religion?