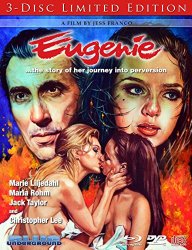 ...the story of her journey into perversionMarie Liljedahl (the luscious star of INGA) is Eugenie, an innocent young woman taken to an island paradise where she is initiated into a world of pleasure and pain controlled by the sinister Dolmance (the legendary Christopher Lee). But when she surrenders to her own forbidden fantasies, Eugenie becomes trapped in a frenzy of drugs, sadomasochism and murder. Can a frightened girl in the grip of carnal perversion find sanctuary in the orgies of the depraved?Jack Taylor (SUCCUBUS) and Maria Rohm (MARQUIS DE SADE'S JUSTINE) co-star in this legendary erotic classic from Jess Franco, the infamous director of VAMPYROS LESBOS and VENUS IN FURS. Based on the notorious novel 'Philosophy in the Boudoir' by the Marquis de Sade, this rarely seen shocker is presented completely uncut in a beautiful new 4K transfer, and remains one of the most controversial explorations of extreme sexuality in European cinema history!EXTRAS:* 'Perversion Stories' - Interviews with Director Jess Franco, Producer Harry Alan Towers, and Stars Marie Liljedahl & Christopher Lee* 'Stephen Thrower on EUGENIE' - Interview with the author of 'Murderous Passions: The Delirious Cinema of Jesus Franco'* Theatrical Trailer* Poster & Still Gallery* BONUS Collectable Booklet includes writing by author Stephen Thrower* BONUS CD - EUGENIE Original Motion Picture Soundtrack by Bruno Nicolai