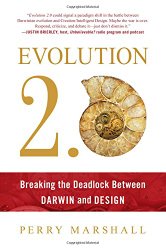 150 Years Later, the Creation Evolution Debate Still Rages. Both Sides Are Half-Right. And Both Are Wrong.Meet the opponents:In one corner - Proponents of Intelligent Design like William Dembski, Stephen Meyer, and Michael Behe. Many defy scientific consensus, maintaining evolution is a fraud. They challenge decades of data in biology, chemistry, genetics and paleontology.In the other corner - Devout Neo-Darwinists like Richard Dawkins, Daniel Dennett, and Jerry Coyne, who insist evolution happens "willy nilly." Strangely, they sidestep the latest science, glossing over crucial questions and fascinating details.   But what if both sides are half-right?What if both sides are missing something important, clinging on to outdated views, theories, and interpretations?There is a third way. Evolution 2.0 reveals experiments which prove that, while evolution is not a hoax, neither are changes random nor accidental. They are targeted, adaptive, and aware. You will discover: -Nearly every cell in your body can edit its own DNA, negating random destructive copying errors, charting a path for its transformation (page 82)-Genes - far from being set in stone - actually change and adapt to the environment. -How germs re-engineer their genetic destiny in real time by borrowing DNA from other organisms (page 94) (it's the reason why your doctor tells you to never stop taking antibiotics halfway through your prescribed course)-How bacteria communicate, organize themselves into armies, then stage coordinated attacks on your immune system (page 110)-Brand new species in 18 months, sometimes 24 hours - Through two empirically proven, reliable systems of natural genetic engineering (page 146)-How and when cells generate new information and genes that did not exist before (page 150)-Why DNA, which is digital instructions for building proteins, is not merely like code but is code, the same way as the software on your smartphone is (page 38)-How cells switch genes on and off in response to the environment, activating new traits that get passed from parents to kids (page 115)-Many more amazing, scientifically verified facts that not only further technology and medicine, but fuel our sense of wonder at life itself. If creationism seemed to be leaving out important details, here you'll the missing clues.You will discover fascinating real-time evolutionary lab experiments by an eminent scientist in the 1940s, whose work was recognized in 1983 by a Nobel prize & US postage stamp, but then... is still rarely mentioned in school science curricula.  High priests of scientific establishment actively oppose research that threatens antiquated theories, labeling results in scientific publications a "media fiasco".This book explores 70+ years of under-reported evolutionary science. Evolution 2.0 chronicles bestselling author Perry Marshall's 10-year journey of in-depth research. As an Electrical Engineer, author of an Ethernet book and world-renowned business consultant, Mr. Marshall connects the dots in a new refreshing way. He tackles hard questions about evolution with precision, making it clear when information is proven with hard data and when it can only be inferred.  This book will open your eyes and transform your thinking about life, evolution, and creationism. You'll gain a deeper appreciation for our place in the universe. You'll the see the world around you as you've never seen it before: adaptive, efficient, and incredibly elegant.$3 Million Technology Prize: Origin of Information is one of the central problems in modern biology. No one knows where the genetic code came from; no one knows how the first cell developed. To solve this, the author has organized a Private Equity Investment group which is offering a prize, reminiscent of the X-Prize, for a natural process that produces coded information. The prize amount is $3 million USD as of August 2015. Details in Chapter 23 and Appendix 4.

Do you want ot get the Evolution 2.0: Breaking the Deadlock Between Darwin and Design?

Sophie Writes a Love Story
Cognitive Cooking with Chef Watson: Recipes for Innovation from IBM & the Institute of Culin...
MONEY Master the Game
On the Edge of the Dark Sea of Darkness (The Wingfeather Saga)
Ghettoside: A True Story of Murder in America
From the First Bite: A Complete Guide to Recovery from Food Addiction