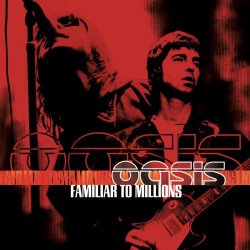 In 2000 Oasis wisely dispensed with theatrics and concentrated on being the world's greatest stadium-sized pub-rock band. And so, with just three mammoth video walls in tow, they toured the world. Big as the video screens were, however, the band's straight-ahead rock and Liam Gallagher's mouth were even bigger, and contributed much to the drama, tension, and entertainment of the tour behind Standing on the Shoulder of Giants. Fine examples of both were recorded when they played Wembley Stadium. Musically, Oasis make good on their claims to be the biggest and the best with rocking versions of "Supersonic," "Shakermaker," "Cigarettes & Alcohol," and "Live Forever." As for Liam, Familiar to Millions wouldn't be half the album it is had his inane ramblings, brotherly abuse, and audience taunts been edited out. That's where the real live atmosphere lies--there and in the sound of 70,000 fans singing the choruses of "Wonderwall" and "Don't Look Back in Anger." --Dan Gennoe

Do you want ot get the Familiar to Millions?