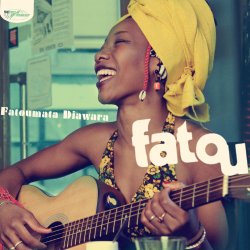 World Circuit/Nonesuch Records present singer/songwriter Fatoumata Diawara's debut album, Fatou. Diawara, who was raised in Mali and now lives in Paris, has been receiving rave reviews since the album's release in the UK and Europe. The Telegraph called her "the most beguiling talent to hit the world music scene in some time," and says "this stylish debut doesn't put a foot wrong," while the Times said "the air of wistful, understated beauty draws you in,v and Mojo called her a "spell-weaving new voice."Diawara fought her parents' opposition to her artistic career, and her culture's attitudes toward women, to act in theater and film before beginning her musical career. She sang backup for, among others, fellow Malian and labelmate Oumou Sangare before striking out on her own.John Paul Jones (bass), Toumani Diabate (kora), and Tony Allen (drums) all make guest appearances on Fatou. Damon Albarn and Herbie Hancock also have shown their appreciation for Diawara's music; she has performed with Africa Express, AfroCubism, and Hancock's Imagine project. In addition to her own constant global touring, Diawara performed as part of Albarn's project Rocket Juice and the Moon. (Albarn's super-group features himself, Tony Allen, and Flea.) Diawara played a main role in the live shows and is featured on several tracks on the studio album of the same name. She also recorded a track with soul veteran Bobby Womack for his album The Bravest Man in the Universe.

Do you want ot get the Fatou?