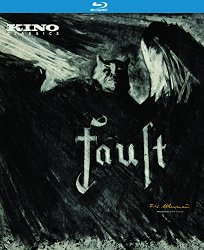 Mobilizing the full resources of the Ufa Studios, F.W. Murnau (Nosferatu, Sunrise) orchestrated a colossal adaptation of Goethe's FAUST that ranks alongside Fritz Lang s Metropolis as the greatest achievements of the German silent cinema. Gösta Ekman stars as the titular alchemist who, struggling with his faith amidst a devastating plague, is offered the power to cure and the gift of youth... in exchange for his soul. As the diabolical Mephisto, Emil Jannings (The Last Laugh) delivers a performance of operatic intensity, by turns charming, comical and horrifying. This special edition contains the Friedrich Wilhelm Murnau Stiftung s meticulous HD restoration of the original German release version of the film, as well as a DVD of the lengthier alternate cut prepared by the Ufa Studios in 1930 for distribution in the U.S.Special Features: Piano score by Perez de Azpeitia, adapted from the original 1926 orchestral arrangement, Orchestral score by the Mont Alto Motion Picture Orchestra, Orchestral score by Timothy Brock, performed by the Olympia Chamber Orchestra (U.S. Release version), The Language of Shadows: Faust - a 53-minute documentary on the making of the film and its subsequent restoration, Screen test footage of Ernst Lubitsch's abandoned 1923 production Marguerite and Faust