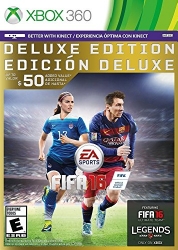 FIFA 16 innovates across the entire pitch to deliver a balanced, authentic, and exciting football experience that lets you play your way, and compete at a higher level. And with all new ways to play! Kick start your Ultimate Team season! Get up to 40 FUT Premium Gold Packs over 20 weeks, start your Ultimate Team season with Lionel Messi on your squad for 5 games and be the first to use the new "KO" and “BAILANDO ROBOT” celebrations when you pre-order FIFA 16 Deluxe Edition today!