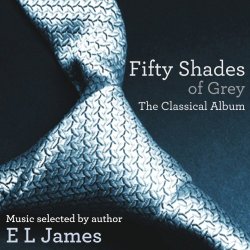 EMI Classics will release Fifty Shades of Grey The Classical Album, a 15-track album featuring classical music personally selected by author E L James herself and referenced in her bestselling Fifty Shades book trilogy. The album will be available digitally August 21st and on CD September 18th.Says James of the new compilation album: "I am thrilled that the classical pieces that inspired me while I wrote the Fifty Shades Trilogy are being brought together in one collection for all lovers of the books to enjoy."The three novels in the Fifty Shades trilogy (Fifty Shades of Grey, Fifty Shades Darker and Fifty Shades Freed) are published by Vintage Books and have sold more than 20 million copies in the U.S. (the trilogy has sold 31 million copies worldwide). The books' various references to classical music have spurred sales of the pieces mentioned even going so far as to cause Spem in Alium, a 16th century motet for 40 voices by Thomas Tallis, to jump to the top of the classical charts in the UK.Fifty Shades of Grey The Classical Album aims to provide the perfect accompaniment to the Fifty Shades reading experience, setting a mysterious and alluring atmosphere with just the slightest hint of danger...the music on the album includes The Tallis Scholars' sweeping version of Spem in Alium featured in the first novel, along with 14 other works from the books, such as the 'Flower Duet' from Lakmé, Pachelbel's Canon in D, the 'aria' from Bach's Goldberg Variations and more. The recording artists include such world-class performers as Sir Simon Rattle, King's College Choir, Barbara Hendricks, and Alexandre Tharaud, and the album features cover art based on the novels with a liner note from E L James.

Do you want ot get the Fifty Shades Of Grey: The Classical Album?