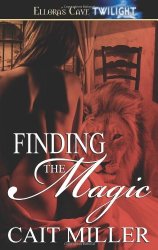 All her life artist Jayne Davis had believed in magic, but sometimes just believing isn't enough. When first her mother and then her father died Jayne retreated from life, taking the first job she was offered and leaving her dreams behind. Nowadays the only place she looks for magic is in the books she reads. But all that is about to change when a man who might be more than he seems brings the magic to her. Cameron Murray believes in the magic too. He believes it ruins lives and he believes it has brought danger to Jayne's doorstep. It's up to him to keep her safe and make sure magic isn't the end of them bothâ€¦and guard his heart from the one woman who could take it from him.