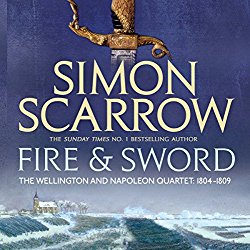 Fire and Sword is the pause-resisting third novel in Simon Scarrow's bestselling Wellington and Napoleon Quartet. A must-listen for fans of Robert Harris. 1804. Napoleon Bonaparte is Emperor of France, his ultimate aim: to rule Europe. After defeat at the Battle of Trafalgar, he wins a glorious victory against Austria at Austerlitz. He then deposes the Spanish king and places his own brother on the throne. But he is yet to triumph over his most hated enemy: Great Britain. Arthur Wellesley (the future Duke of Wellington) throws himself into the British campaign in Europe. After glory in Portugal, he commands the army in a series of triumphant battles across Spain. For those living reluctantly under French rule, his victories suggest that Napoleon's progress is not inexorable: freedom can be restored....