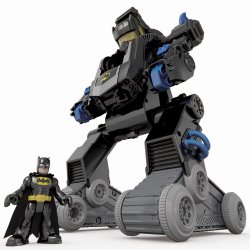 Fisher-Price Imaginext Batbot The Imaginext Bat Bot has truly transforming power!View larger After the Bat Bot transforms, Batman is ready to search the city over for evil villians!View larger It’s a Bat Bot. It’s a Tank. Two ways to create adventures! The Transforming Bat Bot comes with a cool Remote Control. Kids can use it to make him go forward, backward, or make the awesome transformation to Bat Tank—along with lights, sounds and speech, like “Bat Bot en route” and lots more! On the Bat Tank, there’s a blaster with four disks to launch at any Gotham City villain. Or, press a button to activate the working claw and grab evildoers before they can make a fast getaway! (Figures sold separately.) Press the right button for “systems check”, the left button for “mission mode” and you’re ready to roll onto the next Bat battle! It’s twice the excitement, twice the fun, with a robot and a tank in one! Over 100 sounds and phrases! Besides truly awesome transforming action, the Transforming Bat Bot has two modes that activate sounds and phrases just by pushing a button. Press the “mission” button to hear phrases like “Proceed with caution—it may be a trap!” or “Scanners show a collapsed building!” and cool sounds like sirens. Press the “systems check” button for lights, sounds and phrases like “Initiate power up!” , “Scan data”, “Send transmission”, computer sounds and more. Activating lights, sounds and so many phrases helps reinforce the idea of cause and effect as kids make it all happen! Discover the worlds of Imaginext, where the stories and the play never end. If your child loves DC Super Friends, the Transforming Bat Bot can help him bring those adventures to life with plenty of pretend play. Phrases like “Scanners show thick smoke!” or “The Joker is causing trouble” act as story-starters to help young crime fighters imagine all sorts of different scenarios as they play. And with over 100 phrases and sounds, they’ll spend hours creating one new adventure after the other, building their own powers of imagination. For any further queries please contact Technical Support Number @ 800-432-5437 Imaginext Transforming Bat Bot has over 100 sound effects & phrases!View larger What’s in the Box? Includes Imaginext Transforming Bat Bot, Remote Control, Batman figure and four disks for launcher. Product Features: It’s a robot and a tank in one—with over 100 sound effects and phrases! Bat Bot eyes and vents light up Includes Transforming Bat Bot, Remote Control, Batman figure and four disks for launcher Requires 6AA batteries for Bat Bot and 2AAA batteries for Remote Control Add to the fun with more Imaginext DC Super Friends play sets, vehicles and figures (Each sold separately and subject to availability.)