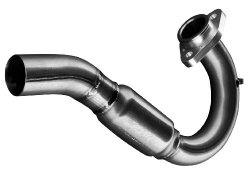 The redesigned PowerBomb is a four-stroke header that incorporates FMFs patented PowerBomb module at a precise location in the initial stage of the header. By positioning this Bomb at a key point in the system, increased performance and flow is achieved through the expansion and contraction of exhaust sonics through the system. Result is a flow increase of nearly 10%! Theouter chamberin the Powerbomballows the air to expand, cool and ramp back up at a higher velocity. Up to 10% horsepower gain Proprietary technology to increase flow Pre-muffler lowers sound output up to 1.5db Modular exhaust port flange for reliability and less vibration Model Notes: The following KTM models require the use of an FMF muffler- 450SX/MXC/EXC/XC 2004-2006, 450XC 2006-2007, 450XCW 2007, 525XC/XCW 2006-2007