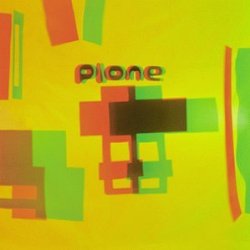 The music of Plone, a sonically erudite British trio who have released highly acclaimed singles on the Warp and Wurlitzer Jukebox labels, is deceptively simple and nursery rhymeish. Plone is clearly influenced by coolster retro sounds--Atari video games, cocktail lounge music, soundtrack music (in particular those to 1950s sci-fi flicks and 1960s spaghetti Western films), das Kraftwerk, early '80s electrobeat, and Casio keyboard music. But the group mostly avoid the trappings of kitsch for its own sake; this is "real" music, with heavy (albeit loopy) melodies and intriguing and unexpected progressions, even though they've been made to sound as if they're emanating from a Colecovision console. One of the more interesting things about Plone is the way that modern, computer-based manipulation of sound is brought to moldy analog synths; there are multiple, delicately lopped and smudged layers of sound to each track. Take "Plock," which sounds all at once like Smurphy techno mixed with Ovalized Teletubbies electro and the long-lost soundtrack to Tron: The Toddler Years. --Mike McGonigal