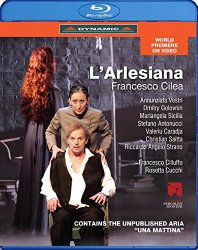 The Dynamic label presents, in a world premiere on Blu-ray Francesco Cileas rarely heard or produced opera LArlesiana (1897, rev. 1898). Its the story of Federico, the older son of the widow and farm owner Rosa Mamai, and his insane passion for a mysterious woman who, in the opera, is never shown. Federico wants to marry her desperately, dreams of her, suffers for her, and step-by-step his mind begins to waver. The people around him try in vain to prevent this love from becoming a damning obsession. The end result for Federico, however, is tragic. The operas famous aria ""Il lamento di Federico"" has been a favorite with tenors throughout the ages, including Enrico Caruso. This recording also features the aria for tenor, ""Una mattina"", written by Cilea for the opera's first version and then lost, here in world première recording. Directed by Rosetta Cucchi, a co-production between Teatro Pergolesi and Wexford Festival Opera.