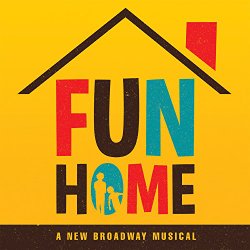 Original cast recording. Following a sold-out, critically acclaimed run at The Public Theater, the groundbreaking new musical Fun Home comes to Broadway. It was named Best Musical by the New York Drama Critics Circle, and received the OBIE, Lucille Lortel, Outer Critics Circle and Off Broadway Alliance Awards in the 2013-2014 season. Hailed by The New York Times as a "beautiful heartbreaker of a musical," Fun Home "finds a shining clarity that lights up the night" in one of the best-reviewed productions of the year. In this fresh, daring new musical, based on the acclaimed graphic novel by Alison Bechdel, the cartoonist relives her unique childhood playing at the family's Bechdel Funeral Home, her growing understanding of her own sexuality and the looming, unanswerable questions about her father's hidden desires and sudden death. With music by four-time Tony Award-nominee Jeanine Tesori and book and lyrics by Tony Award-nominated playwright Lisa Kron, Fun Home features a splendid cast, including Tony Award-winner Michael Cerveris and three-time Tony Award-nominee Judy Kuhn, "doing some of the best work of their careers" in a "miracle" production directed by Sam Gold (New York Magazine). New York Daily News, in a 5 star review, called it "achingly beautiful," Variety hailed it as "warm, funny and heartbreaking," while New York Observer simply proclaimed it "a triumph!"