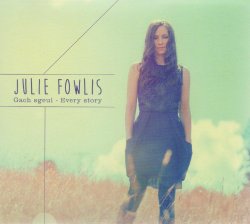 This new album by Julie Fowlis is a carefully selected collection of songs from Gaelic Scotland. Traditional songs presented with new musical accompaniments, this record is all about the songs, and all about the story. With lush accompaniments and arrangements, this record really showcases the strength and maturity of Julie's voice; a change, she says, which has come after having two children. 'A great singer and friend of mine told me when I was expecting my first child that my voice would change, and he was right. I feel now that this is the true sound of my voice.'During the four years since her last studio album release, Julie has spent time researching Gaelic culture and tradition through a Masters degree and an Artist in Residence project with one of Europe's most ambitious digital archive projects, Tobar an Dualchais. She has also developed her career in broadcasting, presenting for Sky Arts HD, BBC Radio 2 and 4 and BBC Scotland and ALBA TV. She also recorded and produced music for the Grammy/Oscar/Golden Globe winning animation film, Disney Pixar's 'Brave', and has been awarded a number of accolades, including an Honorary Doctor of Music degree. Her brush with Hollywood has influenced her reach and audience but she remains grounded and connected to the traditions of her homeland.Featuring fantastic musicians Éamon Doorley, Duncan Chisholm, Tony Byrne, Donald Shaw, Tom Doorley, Ewen Vernal, Iain Sandilands, Micheal McGoldrick, RANT fiddles and more, 'Gach Sgeul/Every Story' is another extraordinary recording from one of Scotland's brightest jewels.

Do you want ot get the Gach Sgeul / Every Story?