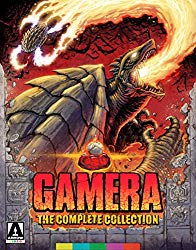 The original hero in a half-shell returns! For the first time ever worldwide, all twelve tales of the adventures of everyone s favourite titanic terrapin are collected together in one deluxe Blu-ray boxset. This limited edition collectors set traces the decades-long evolution of Gamera, from the friend of all children in his more light-hearted earlier films, to the Guardian of the Universe in the groundbreaking 1990s reboot series, often hailed as three of the best kaiju films ever made. Limited collectors edition packaging, housed in a large-format rigid box, fully illustrated by Matt Frank All twelve uncut original Japanese versions of the films in high definition, with lossless Japanese and English audio 4K restorations of the critically acclaimed Heisei trilogy (Gamera the Guardian of the Universe, Gamera 2: Attack of Legion, Gamera 3: Revenge of Iris) Hours of new and archive bonus features, expert commentaries (including August Ragone, David Kalat, and Steve Ryfle & Ed Godziszewski), interviews with cast and crew, and the worldwide Blu-ray premiere of Gammera The Invincible (the American theatrical version of the first film) Hardback 120-page comic book including a full-color reprint of the four-issue Gamera comic series originally released by Dark Horse Comics in 1996, and the first-ever English-language printing of the prequel comic The Last Hope by Matt Frank and Joshua Bugosh Perfect-bound 80-page book including a new retrospective on the series by Patrick Macias, kaiju X-ray illustrations by Jolyon Yates, and much more! FINAL SPECS TO BE CONFIRMED SOON