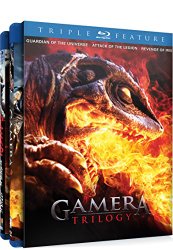 Join Dr. Nagamine, Inspector Osako and the lovely Asagi Kusanagi as they attempt to unravel the mysterious and deadly monster attacks of both the Gyaos and the Legion. With the help of the military, the survival of the human race depends on them. And the fate of the world depends on a gargantuan, aeronautic and flamably breathed reptile - Gamera, the guardian of the universe! This limited edition box set includes all 3 feature films from the Heisei Gamera trilogy, all beautifully remastered in stunning high definition. Also included is a wealth of Bonus Features! Gamera: Guardian of the Universe (1995) Color 103 mins Not Rated That giant fire-breathing turtle you loved as a kid is back with a vengeance in GAMERA: GUARDIAN OF THE UNIVERSE.  The all-new science fiction spectacular has been hailed by critic and fans alike as one of the best monster movies ever!  Under the guidance of acclaimed director Shusuke Kaneko (Necronomicon) and screenwriter Kazunori Itô (Ghost In the Shell), the lean, green fighting machine has been reborn with a whole new set of tricks under his 200-foot shell.  Gamera is ready for the new century with stunning state-of-the-art computer animation and dazzling special effects.  The super turtle combats both a misguided military and a hideous race of man-eating flying reptiles.  Aiding Gamera in his fight are a courageous naval officer, an intrepid ornithologist and a beautiful young psychic.  Don t miss the most incredible slam-bang, knock-down monster slug-fest ever filmed as Gamera turtle-waxes the evil Gyaos through downtown Tokyo in GAMERA: GUARDIAN OF THE UNIVERSE!  Gamera 2: Attack of Legion (1996) Color 114 mins Not Rated From the same crew who brought us the effect-juiced Gamera: Guardian of the Universe now comes an even more CGI-enhanced adventure for our tortugan hero.  A freak meteor shower near Sapporo, Japan brings with it more than just a killer light how.  Electrical problems, over-grown plant life and a whole slew of rather irritable critters also drop in to threaten the human race.  Local science instructor Midori Honami (Miki Mizuno) is called to assist the brave Colonel Watarase (Toshiyuki Nagashima) in the military s oft-confused attempts to save mankind.  They must find a way to successfully combine efforts with their reptilian protector, or both will face ultimate destruction from the Earth s bugged-out invaders.  Join the battle as Gamera and his bipedal pals work to repel the Attack of Legion! Gamera 3: Revenge of Iris (1999) 108 minutes / Color / Not Rated Still reeling after the hard-fought battle to repel Legion, Japan is now reminded of a deadly foe from the past. The Gyaos have returned, and this time the ornery man-eating birds have not only increased their numbers, but also added a menacing new member, Iris, to their destructive little club. Raised by a young girl whose parents Gamera accidentally squished, the flying blood-sucking squid monster Iris takes her learned hatred and goes out on the warpath. Dr. Nagamine and Inspector Osaka are reunited to help Gamera in his relentless quest to protect and save the human race. Can Gamera ground the Gyaos? Can the turtle tie up the terrible tentacles? Do the hapless humans and the rowdy reptile have what it takes to thwart the revenge of Iris? This Limited Edition Box Set Includes All 3 Feature Films, All Beautifully Re-Mastered in Stunning High Definition! BONUS MATERIALS: (HIGH-DEFINITION VIDEO AND AUDIO SPECIFICATIONS DO NOT APPLY TO THE BONUS MATERIALS Gamera 1: Gamera Behind the Scenes, Camera Test and Special Effects Gamera 2: Uncut version of the The Salvo Scene, Behind the Scenes of the Kasum