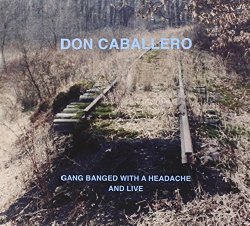 The first-ever live album from legendary instrumental juggernaut Don Caballero! Gang Banged With A Headache, And Live is a recently-surfaced "authorized bootleg" from the math rock pioneers. Recorded in 2003 at a single show in Chicago, Gang Banged captures Don Cab's unrivaled musicianship in gritty, brash fashion.Featuring the lineup of Gene Doyle, Jeff Ellsworth, Jason Jouver, and (of course) Damon Che, the band performs material spanning from 1993's For Respect (Touch & Go) to songs that would end up on 2006's World Class Listening Problem (Relapse Records). While classics like "Fire Back About Your New Baby's Sex" and "Delivering The Groceries at 138 Beats Per Minute" are performed true to their recordings, the band also explores medley territory at times, weaving together songs like "Let's Face It Pal, You Didn't Need That Eye Surgery" and "You Haven't Lived Afro Pop" into the aptly named "Let's Face It Pal, You Haven't Lived Afro Pop. Gang Banged includes a decade's worth of quintessential Don Cab material, rendered on one fateful night in Chicago. But let's be clear: this is not a premeditated live recording nor a "best of" album. This is a found document that affirms our humble opinion that Don Cab is simply one of the best bands that has ever existed.