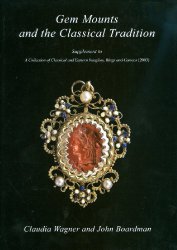 This volume is intended to supply some supplementary information about the gems and cameos published in A Collection of Classical and Eastern Intaglios, Rings and Cameos , published in 2003 as BAR S1136. These had been chosen from a large private collection formed mainly in Italy from about 1921 into the 1960s. It comprised ancient gems but there was a number of post-antique, and part of this publication is devoted to further consideration of some of them, as well as of some comparable examples in the collection not included before, and especially to their later, most distinctive mounts, a feature not always much remarked or explored in publications of ancient gems in later settings. Those on gems in this collection are mainly remarkable for demonstrating some characteristically elaborate Sicilian methods of mounting gems, mainly of the 18th century, and not commonly encountered in published collections. The opportunity is also taken to add a few more interesting examples from the collection, and to republish in colour some of the more important pieces in the original catalogue. The opportunity is, moreover, taken to reflect briefly upon the way in which the ancient traditions in gem engraving and the classical style and subject matter survived or was revived and rediscovered in later centuries. The accompanying text attempts also to summarise some of the problems of original and copy, not only a propos of gems. The study of such matters is extremely complex, requiring a breadth of knowledge about both antiquity and the artistic and literary activities of both the Renaissance and the Neo-Classical movements of the 17th to 19th centuries. A further essay explores the ways by which the subjects of the gems became known beyond the world of those who owned or could readily view the originals, since the publication of gems, by drawing or facsimile, plays a major role in the whole story. This offers the opportunity to illustrate pages from antiquarian books to demonstrate the style and quality of reproduction available and practised before photography.